By Brandi Kennedy - May 05, 2017
A few months ago, I woke up to a pleasant surprise. I had been nominated for a blogging award - the Liebster Award, 2017, which is a recognition award meant to bring attention to small bloggers. Since that time, I've been able to increase my readership in (small) leaps and bounds, due in part to my efforts at networking within the blogging world. I've joined groups where bloggers get together to engage and share advice, wisdom, and friendship, and I've had a ton of fun interacting in comment exchanges that have taught me SO MUCH about what I want for this space - and what I don't.

I have fallen in love with people and perspectives, with histories and futures, with words and the emotion they can evoke, both in the fiction and the non-fiction format. I've made friendships that will last for life - regardless of the attached time frames and how they vary.

So it means the world to me when I wake up to posts like the one I read today, where for whatever reason, someone thought enough of me and this little corner of the internet to nominate me for an award. Again. 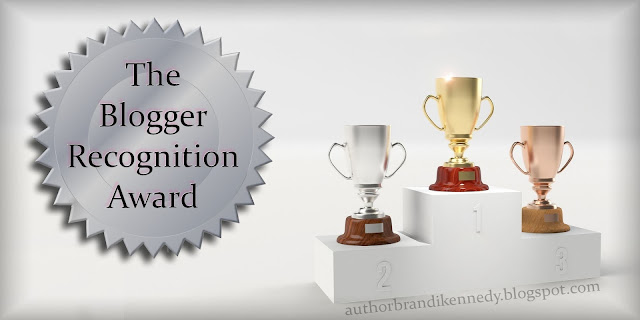 Now, in all honesty, blog awards are really just meme/tags in their most basic form - but what they are in a much less basic way is a pat on the back, a nod of recognition. They're a virtual "well-done" from someone, somewhere, who stumbled onto this site and found something of value.

And I may not understand exactly why Elizabeth Brico thought I was worthy of the nomination - but I totally see why she was nominated. Elizabeth is a mom like me, a mom living with PTSD, who loves words as therapy and uses fiction writing as a way to cope with non-fiction issues. Her short stories are phenomenal, filled with depth and emotion, and she has a real skill for pulling life into her writing.

But I don't need to understand why she chose my name out of the probably billions of great bloggers out there - all I need to do is accept her thoughtfulness as the gift that it is, with the natural gratitude that I try to fill my days with, and the sense of abject humility that forced one of my most favorite people in the world to refuse my nomination before I even had the chance to write it.

"I'm not worthy," he said. "I'm nothing special. I'm just me. And besides, I don't even know fifteen bloggers to nominate." (Of course, I'm paraphrasing.)

Over the last few years, I've slowly been realizing that I've somehow managed to fill my life up with people who actually don't want the best for me. I've met, and accepted the attentions, of people who wanted to use me as a stepping stone, or simply wanted to see me fail so that they could sit smugly satisfied with feeling ... something other than proud of me. I've made more frenemies than friends, and as certain things began to play out in my day-to-day life, I began to question myself and what it is about me that attracts those people.

I started therapy in November 2016, and in that time, I've seen a slow but steady change - not only in the value of my life, but in the value of the people in it. It's said that every person becomes the average of the five people they spend the most time with - and even though I'm not nominating him here, I'm glad Raine Spencer has become one of my five.

But what's the reward about really? Let's see:

Here are the rules:

Thanking someone for something like this is just what must be done, regardless of the rules, and my gratitude for Elizabeth having thought highly enough of me to have nominated me is 100% genuine. Blogging is a lot like motherhood in that you often spend long hours working hard to grow and improve something you love - and it's a lot like motherhood in that you often do it without any recognition for your passion, your effort, or your skillset. To have another blogger so similar to myself take the time to recognize me in this way is humbling and very, very much appreciated - and to have the added bonus of her professional respect is incredibly meaningful. Thank you, Liz. (Visit Elizabeth's blog, Betty's Battleground, here.)
This isn't my first blog, but this one started because I finally published my first novel in December 2012, and I needed a place to connect with my readers, a website to send them to, a place to announce new book covers, teasers, excerpts, releases, etc. Over the years, it's become something of its own - not only a place for books, but for the growth of friendship and the nurturing of myself, not only as a writer but also as a mother and a woman in general. This blog began as a place to grow and promote my writing career - but it has become something so much more than that, and it has quite literally changed my life.
One, don't be shy. This is a big world, and if you stand whispering in a dark corner of the internet, no one is ever going to hear you. Take heart, and be bold. Stand up, stand out, and speak loudly. Otherwise, what's the point?

And two ... be for real. Don't do it to make money (although that's a nice bonus) or to get "famous" (although I imagine that's a nice bonus too, and if I ever get there, I'll let you know), but do it because you have something to say that really, truly, desperately matters to you. I don't care if you want to talk about books or makeup or shoes or parenting or weight loss or traveling. But whatever you talk about, mean it, because people can tell - and it matters. So if you aren't sharing genuinely - if you're just talking into the wind to hear your own voice - then stop right now and redirect.

'Cause here's the thing - if you don't have the courage to implement my #2, then the #1 doesn't matter anyway. If you're fake, after a while people can tell - and they stop listening. And you don't want that, do you?
Okay, so here's the part where I practice what I preach. I know I just said how this is a big huge world and all that stuff, and that you have to stand up and speak out loud if you want to be heard. But the truth is, for most of us, our portion of the world is actually quite small. My circle of influence isn't a large one, and I know that ... and here's where it backfires.

I don't really know 15 bloggers all that well. I mean, I like to think I've gotten to know Raine pretty well, but as great as he is, he's only one person. Then there's David from the Single Dad's Guide to Life, and Ana from Faded Spring, but they've both also been nominated.

In addition to that ... you guys, I'm a single mom trying to build a brand that will support my kids and I. I don't have an outside job - I don't have any other incomes besides the small streams I'm working all day every day to turn into a river my family can float on. My books, my blog, my Patreon, and an embarrassingly small dividend stock portfolio. I blog every third day, post Patreon stuff five times a month, and work endlessly to promote all of it mostly on my own - so I don't have nearly as much time for pleasure reading as one might expect.

That being said, I do lurk around on some amazing blogs from time to time, but there is one not previously mentioned that I actually read on purpose all the time because I like it. So I know this isn't the ordered list of fifteen that it really should be, but I'm nominating Amber from AiringMyLaundry.com. I truly love her blog because she's totally cool with being an everyday wife and mom, and she's not out there trying to be fancy or glamorous or anything other than what she is, which is amazing. She's the hero wife of a hero military serviceman, and she's raising two hero kids that meet the challenges of military life with their chins up. They're meeting other challenges too, and I love that Amber has the courage to air her laundry on the web, one post at a time, to inspire other moms like me.

Plus, she probably knows more bloggers than me, so I bet she can come with fifteen easy.