By Brandi Kennedy - September 08, 2017
You guys have read a few times about how tough mornings are for the girls and I - my PTSD symptoms, anxiety, and generally horrifying morning personality tend to not combine all that smoothly with my daughters' high-energy, high-chatter, super-busy ADHD morning personalities.

They have a hard time getting up, getting dressed, getting moving, staying focused. I have a hard time dealing with all of those things, because being late a major trigger for my anxiety. I tend to have a running mental schedule of the order of events in my head, and deviating from that stresses me out because then we'll be late. Not that the world will end or anything, but because being late defies the logic behind keeping a schedule - and my anxiety doesn't care that Eden is 8 years old and hopelessly unfocused until 30 minutes after her morning meds kick in.

But when we're late getting up despite my best efforts (I even get myself up early so I can mentally prepare for the whirlwind of mornings with the girls), it makes us late getting dressed. And then we're late starting breakfast, which is one of Eden's biggest struggles. She's never been a "good" eater, and has always been more than a little picky, so mealtime is a hassle for us. With Josephine, I could just let her skip meals, knowing she would eat when she got hungry enough. Not so with Eden - as proven by her comorbid "short stature" and "failure to thrive" diagnoses. Mealtime is a battle I can't lose with her - so we fight this battle daily.

Which of course means that despite my setting plenty of time for her to tiptoe and pick through her breakfast, we're always late finishing. Which makes us late to do her hair, and get her meds (can't do them before breakfast or they'll kick in and then she really won't eat), and put on coats, and get out the door.

Which, most mornings, puts us heading out for the elementary school a scant few moments before school actually starts - thank goodness we live pretty close. The problem is, we also live close to a middle school and a high school, all of which tend have quite a lot of traffic all at the same time. Inconveniently, this is the time when we're in the van most mornings, sitting at the stop sign at the exit to our little neighborhood, with the minutes ticking by on the clock and only sporadic gaps in the traffic.

Other factors make each little bit of this worse in ways that I can't change just yet, so the girls and I muddle through as best we can, with moments of calm motherly coaching mixed liberally with moments of the kind of shouting mom I swore I'd never become.

It's actually not uncommon for me to be a totally frazzled mess by the time I make that first stop and send Eden off to class, always with an "I love you, have a good day, be good." This is sometimes offered with a smile - and it is sometimes uttered through teeth clenched so hard it's a miracle they don't snap off.

Occasionally, I drop Eden off to school with my face steadfastly held forward - with frustrated and anxious tears dripping down my face even as my heart celebrates the blissful inattention that keeps my frustration from injuring her super-sensitive "marshmallow" heart. She never seems to notice on the days when I cry silently all the way to her school; she just chatters happily away in the backseat, oblivious.

Josephine has ADHD too, but is much better able to cope with it (and significantly less oblivious these days) - and while I despise the fact that I can no longer hide my struggles from her increasingly observant watchfulness, I'm proud of the compassionate person she's growing up to be. One day last week, after a particularly rough morning with Eden, Joey waited quietly in the backseat until Eden was out of the van - and as we drove off on the way to the middle school, she said softly, "She'll grow into it, Mom. I did."

In the meantime, while Eden walks off blissfully into school each morning with hardly a clue or a care as to the stress left in her wake, Josephine and I are left sitting in the stress, both of us struggling with it and looking for a way to get the day back on track. 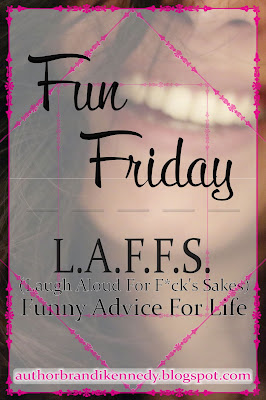 One of my favorite ways to lighten a tense morning and get Joey sent off to school in good spirits is to try and surprise her with the most ridiculous advice I can think of. I've kept a running list of suggestions, and have even asked for people to send them to me on Facebook. So far, the ones to get the best reactions out of her have been:

When I was younger, my older brother and I used to play a game we just called "laughs." I don't remember playing it during the time of our mother's second marriage, when things were so bad that I barely remember much of anything at all - but I do remember playing it in the few years afterward, when things had settled down (in some ways) for our family and we were no longer being brutalized physically. I don't know how the game started, or what made him decide to play it with me so often, but looking back, playing "laughs" with my brother is one of the best memories of my childhood.

It's easy to play - you just laugh.
There wasn't usually a joke or funny stunt or anything, either. My brother would literally just sit there and think of something funny, until he started laughing. He had a really wild, contagious laugh, and he was, in a lot of ways, my childhood hero - I couldn't listen to him laughing like that without laughing too. So I would laugh at him laughing, without even knowing what he was laughing at. I suspect then he would laugh at me, crazily laughing at nothing, and the cycle would continue for a while until we both subsided with streaming eyes and aching bellies.

I still do this, although not often on purpose and not nearly as often with my brother - but it happens anytime my cousin Dana and I are together and one of us gets amused about something. All it takes is a second of eye contact, the hint of a smirk, and we're off. When we were little, we actually used to get sent away from the dinner table for laughing like maniacs, so common were our private jokes. These days, it doesn't even have to be in person - it works on the phone, too.

So ... What's the one got to do with the other?
Well, I've been nursing an idea for a while now, and I think I'm ready to move on it. Those of you who follow me on Patreon (and if you don't ... are you nuts? You're totally missing out!) will know that I post all kinds of stuff there, from story chapters to poetry to podcasts - and even PhLogs, which are sort of like my Patron-exclusive version of a lovechild between snapchat and journaling. The rewards I offer on there are all set at different subscription levels (think Netflix - but me instead, which is better) so you can choose what you put in as well as what you take out. The PhLogs are mostly just for fun, but the story chapters are being compiled into novels as they are completed, the poetry will be compiled also, and the podcasts will eventually become my first non-fiction book.

But I'm getting ready to add L.A.F.F.S. to the $2 tier - and I'll be sharing one L.A.F.F.S. tidbit every Friday starting today! These L.A.F.F.S. will be compiled into a book too, and my Patrons will be the first people I go to when I need new ideas or feedback on the ideas I've already come up with. Patrons will also, of course, be the first to receive updates about the progress of all these projects too, so if that's something you think you'd be into, come on over and check it out!

I'd love to have your L.A.F.F.S. suggestions, too - leave them in the comments below and I'll try them out on Joey in the next few days! Who knows, they might even make it into the book!

While you're here, if you'd like to hang with me and follow my journey as a writer, a mom, and an abuse survivor with PTSD, subscribe to this blog by filling out the "subscribe by email" form in the sidebar. This blog may not always be easy to read, but I truly hope we'll learn from and inspire each other along the way.

Make sure you come over to Patreon too - sign up to sponsor and support my writing journey for as little as $1 a month! Your dollar gets you access to all sorts of content - including photos and mini-blogs from my personal life and advance peeks at my fiction writing, which is a pretty slick deal for just over $.03 a day. For a little more, you'll get to vote for upcoming content, read my poetry and weekly L.A.F.F.S., listen to podcasts, and even get your name on my personal mailing lists - and the best part is that as my patronage grows, so do the benefits for every patron! Our goal right now is 25 patrons, and when we hit that goal, I'm going to start posting daily PhLogs!! (Click that link. Most are subscriber-only, but some are public - I think there's one about my dog being scared of a piglet, too.)

But however we stay connected, whether it's through my books, this blog, or on Patreon, you can rest assured that my brand is built on the concept of what I write and who I'm writing it for. "Love Stories and Lifestyle for the Undaunted Woman." And what's an undaunted woman? Click here to find out more about what it means to be undaunted - and how you can nominate your favorite undaunted woman to be interviewed right here on the blog! The first interview was a total success, and I already can't wait to introduce you to September 2017's Undaunted Woman!

For those who just want the inspirational parts of my content without all the personal aspects, connect with me on social media - that's where I like to share all sorts of things, from self-care tips to mental health quotes to song lyrics and more. Either way, whether you're a first time reader or a long-time loyal follower ... from the bottom of my heart, thank you for being here.